In early 1907, a group of Cleveland area citizens first realized the need for a bank.

In early 1907, a group of Cleveland area citizens first realized the need for a bank. August Erdmann’s Hall was the location for a special meeting on May 1, 1907. After the banking business was fully explained and discussed, the community members in attendance began their subscriptions for the necessary $15,000.00 of capital stock.

Fourteen community members previously signed the “Articles of Incorporation” for the Bank on August 19, 1907. Those “Articles” received the approval of the Commissioner of Banking just five days later.

William Belitz’s old saloon, a section of the Belitz Brothers Hardware Store, provided the first quarters for Cleveland State Bank. The initial business rented the quarters for a grand total of $50.00 a year.

The first new bank facility was occupied in 1911 and remained the home of the Cleveland State Bank until 1959, at which time the building sold for $4,500. 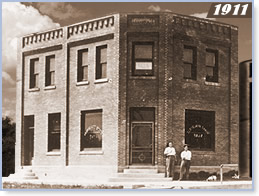